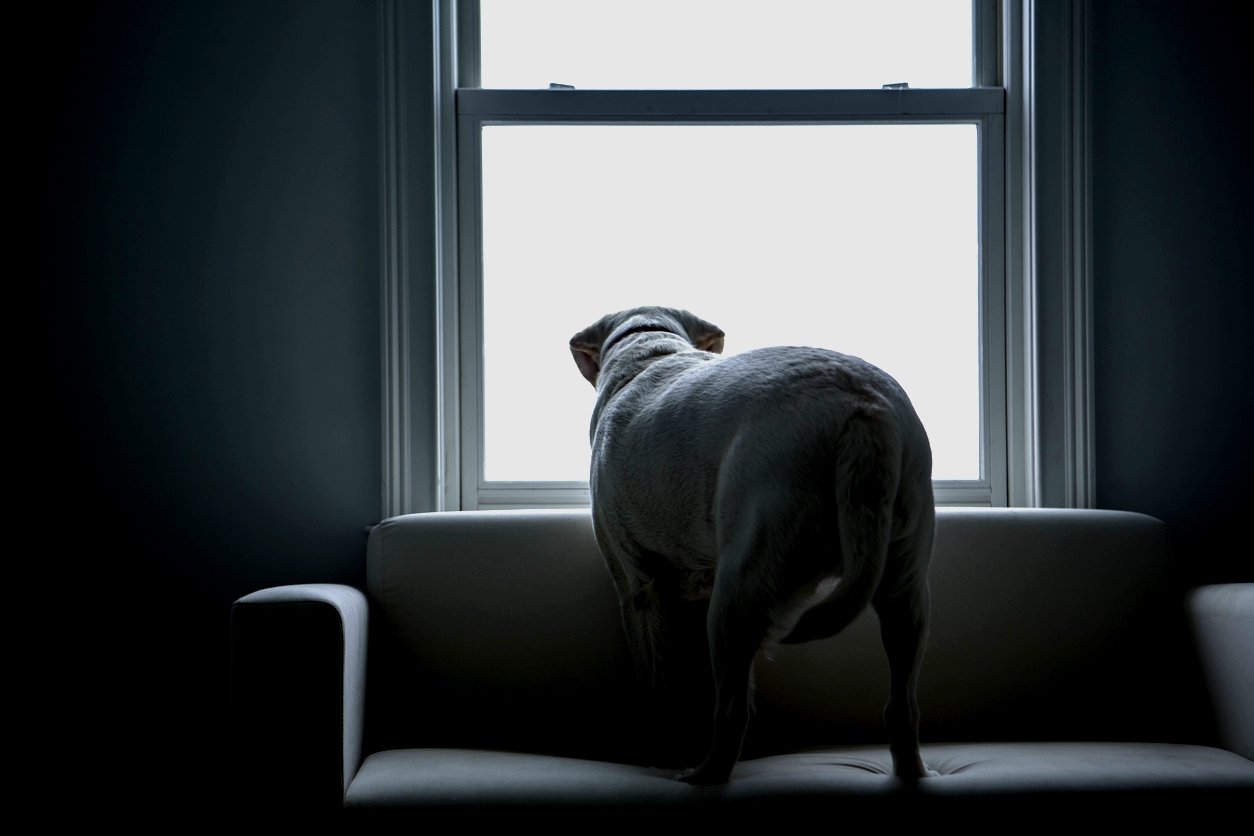 The 2 am chiming of the handmade Freiburg Grandfather Clock, whose presence overwhelmed the small dining room where it rested, temporarily drowned out the click, click, click sound of nails being dragged across the hardwood floor as Walter systematically scanned the dark outside world from the vantage point of every window in the house. However, the clanging, four-note melody, which repeated itself three times every hour, failed to distract Walter from his nightly vigilance. So did the constant snoring coming from his master who had made it a point to sleep with earplugs over a year ago when Walter’s unrelenting pacing from window to window all night long had begun. In fact, nothing could distract Walter from his search for the danger he knew lurked in the ever-shifting shadows cast by the snow-covered trees, street lights, and homes that encircled his refuge. No real monsters or demons had ever emerged from their dark recesses, but that didn’t matter to Walter. He knew they were there, and he also knew it was his steady watchfulness that kept them at bay. Therefore, as he had previously done fourteen times that evening, Walter pressed his cold, wet nose against the even colder glass of the dining room window and stared out into the night. With his breaths coming in short, rapid gasps caused by a fear induced elevated heart rate, it didn’t take long for his vision to become impaired by the moist fog that formed on the window pane. Even so, Walter’s eyes remained fixed on two shadows that were darting in and out of a row of hedges that framed the neighbor’s front yard. As Walter watched, each shadow took on a jagged form with outstretched talons as they brushed against a patch of dimly lit snow. Within seconds, the fog on the glass became thicker as Walter’s pulse quickened and his airways opened wider to provide oxygen-enriched blood to the muscles that would be used for fight or flight should the two shadows reveal the evil creatures they hid. Outside, the subfreezing wind picked up speed and its power pushed against a forked branch swaying high in a tall oak tree standing over the slithering shadows. With each gust, the two black forms caused by the limb jerked and inched closer to the hazy dining room window. On the other side of the window, Walter began to growl.

Watchful Walter is the story of a four-year-old, male, Labrador retriever that suffered from a condition known as a Generalized Anxiety Disorder (GAD). A few of the symptoms that are commonly associated with GADs are hyper-vigilance and hyper-reactivity in the absolute absence of any specific provocative stimuli. Hence, why Walter moved from window to window, maintaining a fearful watch for imaginary threats all night long for over a year. His condition had created a hallucinatory and paranoid type state that had convinced him of an ever-present danger that lurked in the dark recesses of the shadows outside of his home. In his mind, his watchfulness was the key to his survival.

Many factors had undoubtedly contributed to the development of Walter’s acute anxiety with genetics and the passing of one of his owners that he’d grown extremely attached to as the probable causes. But, regardless of the exact reason, a continual, unwarranted fear developed rapidly in Walter, and it quickly became immune to the conventional remedies his surviving owner sought, such as obedience training, confining Walter at night to the bedroom and then eventually to the laundry room which had no windows. When his owner awoke one morning after a sleepless night caused by Walter’s howling and discovered a heavily damaged laundry room, he gave up and opted to let Walter roam free while he slept with earplugs to silence the sound of Walter’s pacing and whining.

As I mentioned in my previous blog, Sweet Elsie – A Life Given by Pharmacotherapy, some problematic behaviors that develop in dogs cannot be successfully treated without the help of proper psychopharmaceutical medications to facilitate the behavior modification process. Walter’s condition had created a chemical imbalance in the neurotransmitters used for mood control and communication by his brain cells. Without first stabilizing these chemicals, Walter’s ability to observe his environment would have remained impaired and proper observation, followed by correct assimilation of the information gathered, that would have been critical for any behavior modification, would have only worsened with the additional stress of training. Therefore, the only way we (his veterinarian and I) were able to chase the imaginary creatures of the night back into the shadows for good, was to treat Walter with a canine pharmacotherapy program for seven months. Afterwards, Walter didn’t need to take his medications any longer. He also no longer felt the need to patrol his home all night long. However, he did feel the need to sleep in the laundry room because his master’s snoring had started interfering with his ability to get a good night’s rest!