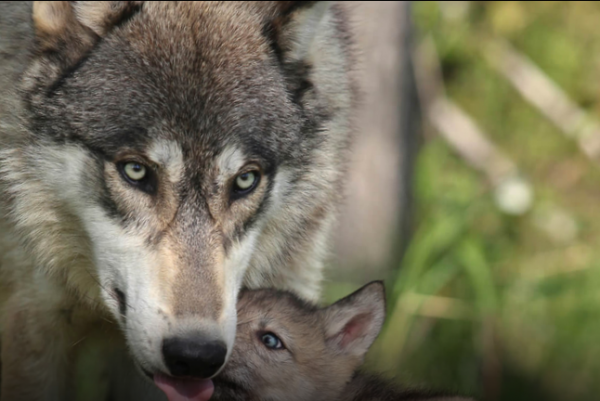 Ranger, my seven-year-old, male, Alaskan sled dog, is lying on the frozen ground chewing a stick when Scarlett, a new twelve-week-old female pup, cautiously noses up to him to investigate what he is chewing. Her inquiry is met immediately with a hard, deliberate stare that is accompanied by a low menacing growl. Like an echo from a distant time when all aggression was sparked by competition for survival, Ranger’s growl leaves no doubt as to the outcome if Scarlett fails to heed his warning.

Perhaps Scarlett has been deficiently socialized to powerful, dominant males such as Ranger, or perhaps up until this moment in life, she has always taken what she has wanted, but whatever the reason, she fails to retreat in the speed and manner required to avoid an attack.  With an imperceptible speed, Ranger springs up, snatches Scarlett by the throat, and pins her to the ground. Suddenly, finding herself the replacement for the stick in Ranger’s mouth, Scarlett flails and howls with every ounce of strength that her twelve weeks of life can bring to bear. Escape is not possible.

“If I do not wish to share, I won’t!” is the lesson and the teacher is a domestic wolf named Ranger. Drawing from a lesson plan created thousands of years ago by nature for the use of social predators, Ranger indoctrinates Scarlett on the way of the wolf where dominance prevails and submission yields. The force of his teeth on her neck does not crush her.  His formidable jaw cuts off her air, but he does not suffocate her. Ranger holds Scarlett firmly, pinned on her back, until she relinquishes her fight and becomes still.  “I am Ranger and to you, young one, my will is law.  Yield to me,”  is said through the eyes of the unconquerable wolf that reigns in the heart of Ranger and in all domestic dogs.  Then, he releases her.

The above passage is an excerpt from my book, Embracing the Wild in Your Dog, and it speaks of the development of one of the most important elements in your dog’s life: acceptance.

When wolf cubs reach the age of approximately five weeks, they are pushed by their mother out of the den that they have occupied since birth. The time of suckling and sleeping in the safety and comfort of the warm earth is over, and the time of learning to survive in the extremely hostile and competitive world of the social predator is just beginning.

As the cubs emerge from the den, eyes squinting from the sudden light of the sun, they encounter the most frightening creature they have ever laid eyes on. Standing tall and statue-still above them is their father, the Alpha male. He does not move a muscle as his cubs slink and whimper under him. Even in these first moments in his presence, the cubs sense his dominance and press themselves as close to the ground as they can. The Alpha male watches their display of submission, but after a few minutes, the cubs lose their inhibition and begin to jump and bite at his legs. Suddenly, like Scarlett, the cubs are pinned to the ground one at a time by the Alpha male. The crushing force of his teeth do not crush them. His formidable jaw cuts off their air, but he does not suffocate them. They flail and howl and squirm for all they’re worth, but he holds them firmly, pinned on their backs, until they relinquish their fight and become still. To each cub he says, “ Feel my power. Know I could kill you, but I won’t. I may kill on your behalf, but I will never harm you. I do this because I accept you. This is the way of our kind. You will always submit to me as do the others. I am the Alpha wolf; my will is law.” After releasing the final cub, the Alpha male gathers them around him and feeds them by regurgitating part of his recent kill.

Recently, I have encountered a few clients that were hesitant to begin their young pup’s training because of the advice they had received from a particular professional in the pet industry. This individual claimed that starting obedience training before the age of six months would result in the client’s dog not trusting them in the future because the stress related to training would “break their spirit”and lead to a harmonic discord. In my book, I write a chapter titled, “Know the Parts,” and I explain that unfortunately, the vast majority of professional dog trainers and veterinarians in America have never spent one second in the wild observing wolves. Therefore, all of their knowledge and advice about canine behavior comes from hand-me-down tutoring where it is the blind leading the blind, or the incorrect conceptual knowledge they are able to glean from books and the Internet. They lack the all-important experiential knowledge. Had this individual ever observed wolf behavior in the wild, he would have realized the error of his advice and would have known that acceptance is more important to wolves and dogs than the very food they eat. This acceptance creates permanent trust, and it is only obtained when the young dog or wolf is subjected to the rule of a powerful leader. Such power convinces the pup or cub that the Alpha wolf is capable of protecting and providing for them; their acceptance by him will give them a better chance of survival than with a wolf that is passive and weak.

Proper training establishes leadership. When this leadership teaches our pups and doesn’t harm them, our pups, who are domestic wolves, feel they are accepted. With this acceptance comes the trust that we seek from our dogs.

My book, Embracing the Wild in Your Dog, is not an obedience training book. Rather, it is about developing a deep understanding of the authors of your dog’s behavior: nature and the wolf. By knowing the wolf in your dog, you will come to better understand its behavior and not fall prey to the recommendations of those that don’t.

Trust or Acceptance? They’re one and the same and created the same way.