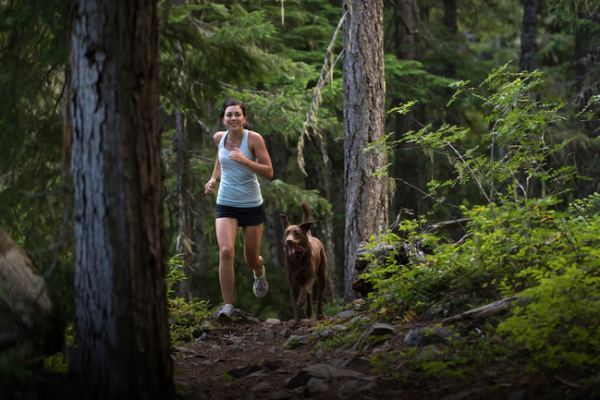 If you pursue running long enough, whether your runs have an urban backdrop or a mountainous setting, an aggressive dog(domestic wolf) or a wild predator will likely cross your path at some point. Knowing how to lessen your chances of such an encounter is important. Knowing how to survive one is vital. Here are a few tips for both:

Tune in, not out: There is no substitute for awareness when it comes to your personal safety while running. However, take notice of the next ten runners you see and count the number of those not running with earbuds. I am confident you will find that number at less than 20%. Most runners are more aware of what’s playing on their iPhone than they are their surroundings and the accompanying noises, and this leaves them vulnerable to possible danger that could be approaching from behind. For many years, I ran fifty miles per week, and I was always able to “hear” the approach of dogs, humans, or vehicles before I could see them. The advanced notice always allowed me to take the appropriate steps necessary to ensure my safety before any of them were on top of me. If you wish to listen to music, podcasts, or audio books, while running, make sure your earbuds are not of the noise canceling type, and the volume is turned low enough to allow you to hear the world around you.

Don’t leave home without these: Unless you plan on jogging around your yard, your runs will most likely take you a great distance from the safety of your home. Two essential safety items that should always accompany you on your run are some form of identification and pepper spray. For identification, I recommend a sporty bracelet made by www.roadid.com. You can customize the bracelet to include information such as your name, address, blood type, allergies, emergency contacts, and a motivational quote to keep you going on those tough days.

Pepper spray is a must have tool for urban running that can protect you from multiple threats to include aggressive stray dogs and human attackers. The spray is non-fatal but entirely incapacitating and comes in small, lightweight, canisters with wrist straps that allow you to carry it while running. However, when running on mountain trails, I recommend bear mace over pepper spray for defense against wild animals. The canisters are slightly larger and more cumbersome to carry on runs, but their spray can reach distances of up to 35 feet compared to 10 feet with personal defense pepper spray. This added length is needed against predators such as bears, wolves, and mountain lions, who are much faster and deadlier than the average dog.

Two times the safety: Escaping the dangers associated with running is always accomplished easier with two people rather than one. A running partner allows for an additional set of eyes and ears on the constantly changing surroundings, thus, greatly aiding the avoidance of danger. Also, should either of you become ill or injured during the run, your partner would be able to render first aid or go for help. Lastly, and most importantly, two runners present a much stronger force to aggressive dogs and wild predators than one. It is a natural, protective instinct for a predator to isolate its prey from a larger group. Thus, allowing it to attack the one and not the many. Doing so increases both the chances of a successful kill and a safe outcome for the predator.

FREEZE, don’t run! Our human survival instinct, especially if we are good runners, is to flee from danger. We want to put as much distance between the attacker and us as fast as we can. The problem is, the animal you encounter, especially if it is a dog or a wild predator, wants you to run! Hunting large, dangerous quarry for thousands of years, taught such predators that exhausting their prey made them easier and safer to kill. It also taught them they had to run faster than their next meal! Therefore, even though you think you’re fast if you encounter a wild predator or an aggressive dog, don’t run. It’s a race you can’t afford to lose. Instead, FREEZE! If the animal continues to approach you, stand with your legs together and your arms folded up on your chest while keeping your eyes on the horizon and not on the animal. Staring is the first level of aggression among predators and dogs and doing so could provoke an attack. By not moving, and not starting, you will most likely not be considered a threat. You still may be regarded as prey, but better to stand still than run and remove all doubt!

Don’t scream! Yelling at an animal that is threatening you will not deter it, but rather, encourage its advance. It’s because most herbivores or ungulates will cry out when they encounter a predator at close quarters. They do this to warn the other members of their herd of the impending attack. Yelling will only activate the predatory instinct in the predator or aggressive dog and motivate it further to attack. If there are other humans nearby, it may be worth the risk to scream to get help. In the event you are attacked and bitten, those other people could come to your rescue.

Don’t fight back! If you ever find yourself in the horrifying event of being mauled by a dog or a large predator, DON’T FIGHT BACK! It may be instinctual to defend yourself, but you will have to suppress that instinct and not fight. For all predators, to include domestic dogs, until the struggling prey is dead, the job’s not finished. Instead, do your best to curl up into a tight fetal position with your hands and arms covering your head and neck, and lie still. By doing so, you will be playing “dead” and the attacking animal will, most likely, cease its attack and move out of the area.

Let go of the leash: As a young boy growing up in Alaska, I would often run with my sled dogs during the short summer months to maintain my fitness and theirs. Our running routes consisted of the game trails and the many dirt roads that twisted through the rugged landscape. The older dogs were reliable and could run off leash, but the younger dogs had to be kept on a tether. Taking the advice of an old trapper, I held the rope loosely in my hand and not tied to me. The advice paid off one day when my young, tethered running partner was suddenly attacked by an unrestrained dog as we passed a remote cabin. Remembering the words of the trapper, “Let go of the leash and give em a fighting chance,” I did just that while standing statue still. Within seconds, the attack was over because my dog did what nature instructed him to do. He gave up! The other dog, sensing the victory, stopped his attack and after giving me a quick glance trotted back to the cabin. If I had held onto the leash and had tried to pull my dog to safety, I would have prevented him from doing what he needed to do to survive the situation. If your four-legged running partner comes under attack, let go and trust nature.

For over fifty years, I have run or hiked trails in every region of the planet. I ran or walked those trails with confidence and I took in the raw beauty of the landscape because I knew that attacks by dogs or wild predators were a very remote possibility at best, but I was always prepared just in case. Don’t lace up your running shoes or your hiking boots without being prepared either. Run with confidence and take in the beauty of the passing landscape before it vanishes beneath your feet.