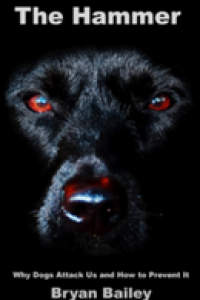 Why Dogs Attack Us and How to Prevent It

Since 2005, over 400 Americans have been killed and over 50 million have been treated in emergency rooms because they believed these myths. Sadly, most of these attacks could have been prevented, but because dog aggression is the most misinterpreted and misunderstood of all dog behaviors, these numbers are rising at a steady rate of 6% per year.

This jaw clinching book will stir the souls of the readers and educate them on the real causes of dog aggression, how to recognize when an attack is imminent and how to avoid it.

Get On The Waitlist for The Hammer Now!

WHAT OTHER HAVE TO SAY

"This book possibly saved the lives of one or more of my family members. The insights Bryan provided allowed us to better understand the behavior of a rescue Dalmatian-Pit mix we had brought into our home. The descriptions of the behavioral actions of the dog were spot on and allowed us to anticipate and react quickly and effectively when the dog attacked one of us. Without the information we learned from the book and from Bryan, the injury could well have been fatal instead of problematic. The book is a must for anyone who interacts with not only an aggressive dog, but any dog you love."
-Wilson Parma
If you are looking for someone who truly understands the ways of your dog, look no further than Bryan Bailey. This man is one of the most interesting people you’ll probably ever talk to. His knowledge of K9s and wolves is astounding.
-Jeanne Louise Goddard
Bryan Bailey nails it! This is the best, most accurate book on dog behavior I’ve read in 60 years! Dogs ARE modified wolves, their genetic instincts are darn close to wolves’, and under- standing those instinctive behaviors makes all the difference in having a dog you can live with! Good job, Bryan, keep up the good work!
-Steve Barber
Rarely does a book come along that so positively mesmerizes me that I read it from start to finish in a single sitting. Yet that is exactly what I did with Embracing the Wild in Your Dog by Bryan Bailey. Bailey’s work is truly worthy of the attention of others and, in my estimation, of an award or two! If you are a dog owner, this one is definitely worth your while.
-Patricia Reding
This book represents much more than a simple training guide. There is an undeniable power and beauty to the author’s musings as he weaves into the text vital lessons learned from his mentor during intense survival training in the Alaskan wilderness. A firm response to currently accepted dog-training methods.
-Kirkus Reviews
An extraordinary book that had me captivated; the world stopped as the pages painted the most incredible story that’s ever been told!
Kelly Fidel
This is one of the greatest books on owning dogs ever written!
-Tracie Hotchner, The Radio Pet Lady
I could not put it down until I finished. This guy’s thinking is ten miles deep.
-Doug Wilson
Bryan’s approach to “taming the wolf in your dog” made sense to us. Realizing dogs are wolves; understanding the cause of aggression and knowing what drives dogs and wolves’ behavior has been extremely beneficial in training our dogs.
-Linda & Chuck Lesnick